After lunch at the Centimeter II pub, the second half of our architecture focused day began with a Vienna architecture tour guided by former architect Stefan. The tour began outside the Architekturzentrum Wien (Az W), which had been visited earlier in the day. Stefan began the tour by telling the group about the history of the area. The museum was in an area known as the MuseumsQuartier. The MuseumsQuartier is an area encompassed by a 400-meter-long baroque building originally built as the imperial stables in the year of 1725. Built by architect Johann Bernard Fischer von Erlach, the huge structure had several purposes throughout its history, including housing the legendary Swiss Guard in the years prior to their dissolution. Throughout the years, the building fell into disrepair until being reopened as a museum campus in 2001. The stables were renovated into museums, shops, and apartments, and several new structures were built within. These additions included the basalt-faced MUMOK (museum of modern art) and the Leopold Museum, designed by architects Ortner & Ortner. The 150 million euro project also added handicap accessibility to the court stables. 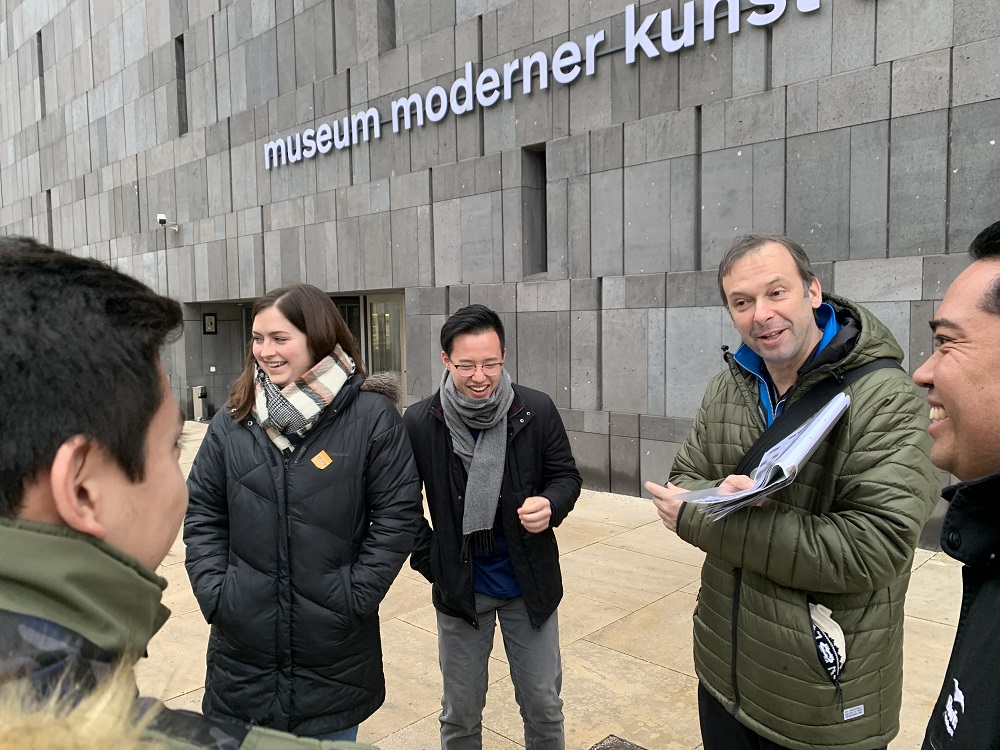 After leaving the MuseumsQuartier, Stefan brought the group to a campus of Technical University (TU) Wien, the local engineering school. The most impressive building on this campus was by far the energy positive Bürohochhaus. This building cleverly hid solar panels between each layer of windows, creating an extremely efficient tower that was at the same time aesthetically pleasing. 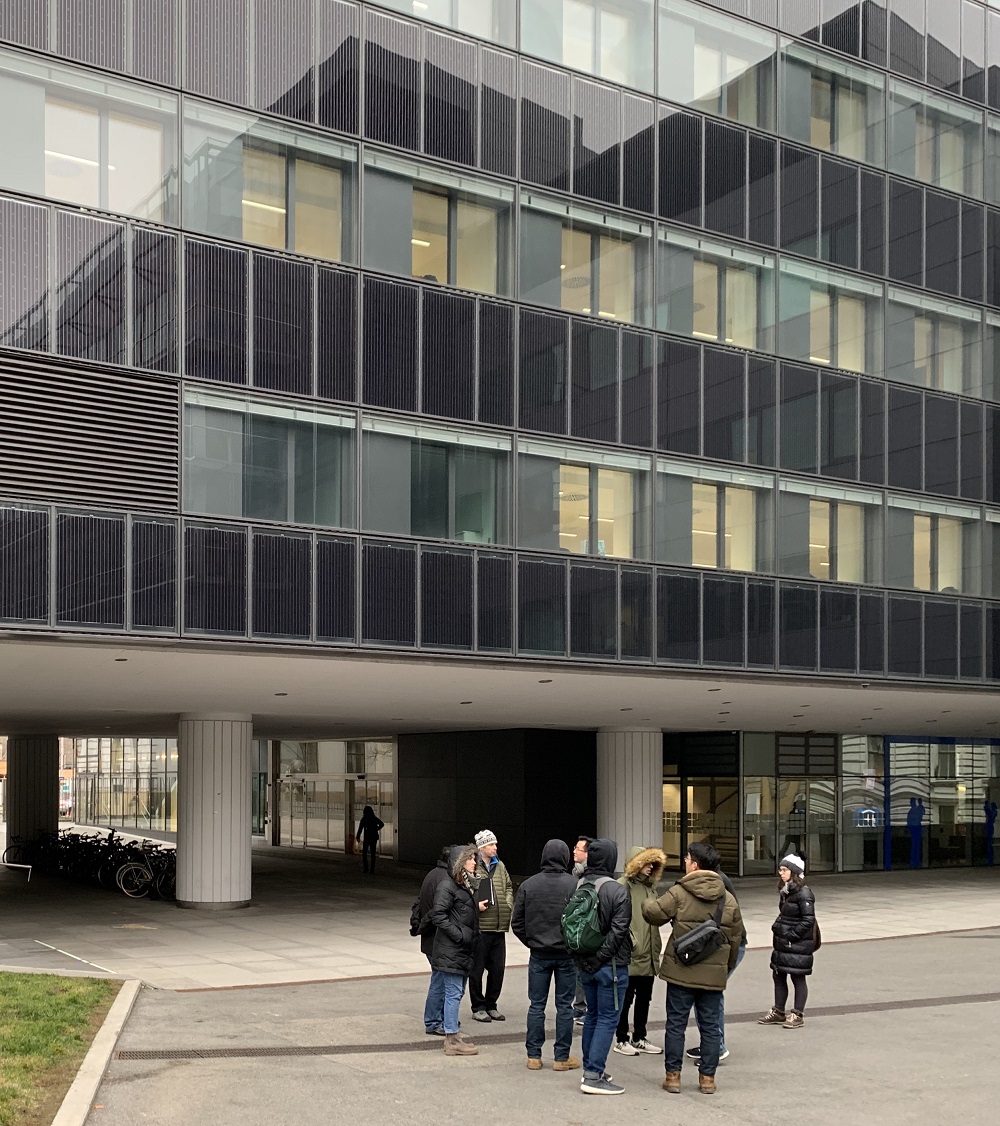 The next destination on the tour, after a brief visit to a monument honoring car manufacturing legend Ferdinand Porsche, was the Wiener Secessionsgebäude. Currently a museum containing the famous Beethoven Frieze, this beautiful building was designed in 1897 by architect Joseph Maria Olbrich, a former student of Otto Wagner. This building was meant to be the embodiment of the Viennese Secessionist movement in art.
Next, the tour made its way to the Hofburg Palace, and the gardens surrounding it. The Hofburg was for several hundred years the royal palace of the Habsburg family, beginning in the year 1438. Being such a large structure, the Hofburg was built in many phases. Several notable architects have worked on the palace, including both Fischer von Erlachs and Lukas von Hildebrant. One of the buildings shown was the Schmetterlinghaus. In the summers, this glass structure is home to thousands of butterflies, but was unopen for the group to visit. After seeing the gardens, the group was led to the front of the palace. Here, ancient foundations dating back as early as Roman times are visible. 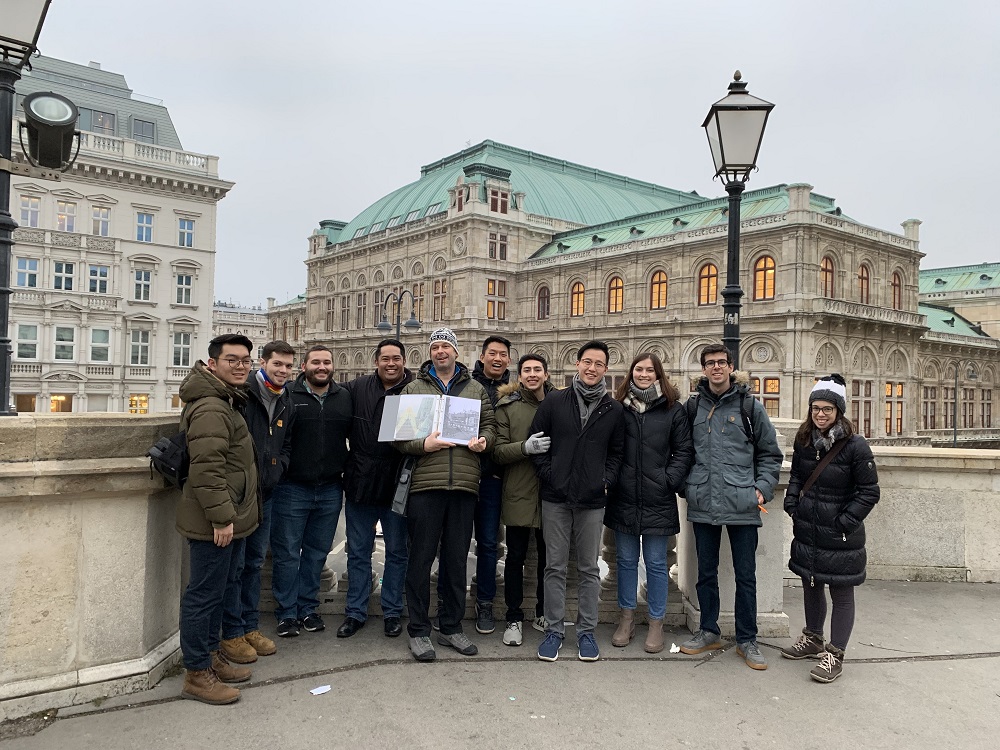 After seeing the Hofburg, daylight was beginning to run out, and Stefan rapidly went from location to location to allow the group to see many more buildings. First, he pointed out the Looshaus, designed by Adolf Loos. This building was famously known as the “house without eyebrows” for its rather plain appearance. Next visited was the Ankerhaus, a residential building by Otto Wagner. Following this, Stefan brought the group into Trattnerhof, a local office building containing one of the continent’s few remaining paternoster elevators. Stefan ended the tour fittingly by bringing the group to the Adolf Loos-designed American Bar.

Thank you to Stefan for the unforgettable experience!